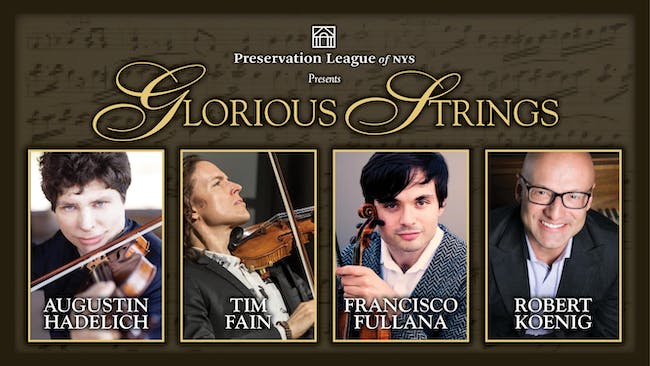 PRESENTED BY PRESERVATION LEAGUE OF NYS

The Preservation League, along with the Clement & Karen Arrison Family Charitable Foundation & The Stradivari Society are proud to present....

Grammy Award winner, Augustin Hadelich, plays the “Kiesewetter” violin by Antonio Stradivari (c. 1723) and is hailed as one of the great violinists of our time. Augustin performs a wide-ranging and adventurous repertoire and is often referred to by colleagues as a "musician's musician." Recently named Musical America’s 2018 "Instrumentalist of the Year," he is known for his phenomenal technique, soulful approach, and insightful interpretations. Augustin is a graduate of the Istituto Mascagni in Livorno, Italy, and The Juilliard School.

Tim Fain plays the “Moller” violin by Francesco Goberti (c. 1717). Tim can be seen on screen and heard on the Grammy-nominated soundtrack of the hit film Black Swan. He gives "voice" to the violin of the lead actor in 12 Years a Slave, and Richard Gere's violin in Fox Searchlight's feature film Bee Season. Not only is Tim a dynamic and compelling performer of traditional works, he is a champion of 20th and 21st century composers and regularly collaborates with American composer, Philip Glass, among others. He is a graduate of The Curtis Institute of Music in Philadelphia, and The Juilliard School.

A native of the Spanish Balearic island of Mallorca, Francisco Fullana is making a name for himself as both a performer and as a leader of innovative educational institutions. Francisco performs on the 1735 "Mary Portman" ex-Kreisler Guarneri del Gesù violin. He is enjoying a diverse international career of concerto and recital appearances as well as a wide array of collaborations as a chamber musician. Francisco has also become a committed innovator, leading new institutions of musical education for young people. He is a graduate of The Juilliard School and The USC Thornton School of Music.

Pianist Robert Koenig is a Grammy nominated musician who has established a reputation an outstanding reputation as a collaborative pianist and chamber musician. He performs regularly in major centers around the world with many of this generation’s most renowned musicians. Recent engagements have included performances at Carnegie Hall in New York, The Kennedy Center in Washington, DC, the Louvre Museum in Paris, and Royal Festival Hall in London. He is a professor at UC Santa Barbara and a graduate of The Curtis Institute of Music in Philadelphia.

Since our founding in 1974, the Preservation League has built a reputation for action and effectiveness. Our goal has been to preserve our historic buildings, districts, and landscapes to build a better New York, one community at a time.

Our vision is a New York State whose people value and protect their meaningful historic places in an environment that encourages and incentivizes their preservation. We will continue to be the statewide leader in establishing historic preservation as a widely accepted tool for economic development, community revitalization, and smart, sustainable growth.

Our strength lies in our relationships with people who wish to protect the architectural and cultural heritage of the Empire State. We welcome all individuals, organizations, and businesses to join us in this mission.